Slaying Barak Obama and his Flat Earth Society: Obama is a Solar Denialist

Dogs and their Interests

In his recent speech on climate legislation, Mr. Obama quipped:

“Regarding climate change, we don’t have time for a meeting of the Flat Earth Society.”

Mr. President, time for you to be Slayed! (oh hiiiiii NSA…booga booga!)

Let’s have a look at a typical model of the energy input and output to the Earth, as forms the basis of the entire field of climatology and related alarmism, warmism, luke-warmism, and even most of outright scepticism:

Almost everybody accepts these energy balance models for solar and terrestrial energy, and every Tom, Dick and Harry has their own version, but they all basically follow this same format.  The Kiehl-Trenberth climate model is such an example.

The following is a lesson in rationalism, in how to think critically rationally.

Question 1:  In the above diagram, what is the name of the geometric shape which forms the surface of the Earth?

Question 2:  Is the geometric shape from Q1 curved, or flat?

Question 3:  What is the name of the geometric shape of the Earth?

Question 4:  Are the geometric shapes from A2 and A3 the same thing?

Question 5:  Does the above figure represent the Earth?

Question 6:  Does the above figure represent any of the physics of the Earth?

If you would have independently answered the above questions as their answers indicated, and you understand why you would answer in such a way, then congratulations, you are a rationalist!  You can actually think critically.

Any alarmist, warmist, luke-warmist, and most sceptics would have gotten severely hung up at Questions 5 & 6, and wouldn’t have been able to answer them at all or at least not without major reservations.  The only critically rational answers are the definite answers provided.

The above figure is from the University of Washington by the way, produced and believed in by people who actually think they qualify as PhD’s in science!  And then other people who have high-school training in science (if that) believe in it too.  How cute for all of them.

And kind of amazing, in the sense of when you first witness your dog eat its own poop…a kind of witnessing amazing stupidity.  It is quite surprising the first time you see your dog doing this.  Although, there are reasons why dogs eat their poop sometimes;  …there is no natural reason other than fraud and/or stupidity for people to not be able to answer Questions 5 & 6 correctly.  The answers for 5 & 6 follow directly from the previous answers of 1 through 4…there is no rational way to get around that.

Only the Rationalists do not believe that the Earth is flat, and therefore only for the Rationalist does the possibility exist that they do not have faith in believing in the greenhouse effect.

Let this distinction be clear: sceptics are not rationalists.  You will find no sceptics not believing in the greenhouse effect and hence not believing that the Earth is flat…this makes the sceptics the most curious and self-contradictory group of all the believers.  Isn’t it amazing for a person to call them-self a sceptic, while at the same time they will not be sceptical about the Earth being flat?  Dog, meet poop.

Mathematically, the spherical Earth is turned into a flat plane by averaging the solar input over the entire globe.  That’s what you see occurring in the above figure.

Question 7:  Does the Sun shine on both the night-side and day-side of the Earth?

Question 8:  Does averaging the solar input over both night-side and day-side create a model representing the Earth?

Isn’t rationalism so clear, and simple?

The standard energy model of climatism averages the energy fluxes over the entire globe, discarding day and night by transforming the real spherical geometry into a fictional flat plane.  Mathematically, this requires a reduction in the solar intensity by a factor of four, because the solar power gets distributed over a larger surface area (the night-side) where it doesn’t actually impinge.  This solar-power-reducing-model therefore imagines the solar input to the planet to have a temperature forcing value of -18C.

With solar input so cold, an arbitrary and entirely nonsensical invention is created where a cold gas heats up a warmer surface.  This is what you see in the energy model diagram from above:  The atmosphere, not actually being a source of energy because it has no continuous chemical or nuclear release of energy ongoing inside it, is conjured to provide an equal amount of energy input to the planet to what the Sun provides!

Trapped Heat doesn’t Cause Heating but it Heats

The people who believe in a flat Earth sometimes know that making the atmosphere a source of heat as strong as the Sun is patently ridiculous, and so sometimes they claim that “it isn’t about cold heating hot”, and get this, “but only about cold trapping heat”.

Let’s take Obama’s Flat Earth Society’s climatist diagram of energy flow of the figure back up above, and zoom out a bit so that we can see what this model looks like in space in relation to the Sun.

Question 9:  Is the Earth a flat plane in space, twice the distance from the Sun?

Question 10:  Does an energy model with the Earth as a flat plane in space twice the distance from the Sun represent anything scientific or physical or realistic about the Earth and the Sun?

Answer 10:  No.  Nothing scientific, physical, or realistic, at all.

Question 11:  Is sunshine too cold to melt ice and evaporate water?

Answer 11:  No.  Sunshine IS hot enough to melt ice and evaporate water.

What would be a scientific, physical, and realistic model of the Earth and Sun? 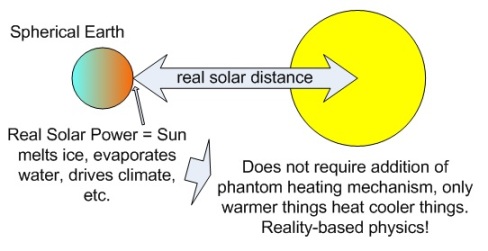 With an energy model created based upon the reality of the above figure, including water and a rotating planet Earth, Sunshine is hot enough to drive the entire climate, as anyone would naturally expect.  The atmosphere, not actually being a source of energy, is never needed to be conjured as a source of energy in such a reality-based model.  The greenhouse effect is discarded as a fraud, because it makes no sense and was never based on a model that made sense, and it simply isn’t required.

Obama is Mocking You

So it really is that simple.  The reason why Obama’s handlers get him to say things like that is because they believe YOU to be that stupid.  They have created a flat-Earth model of the Earth in order to reduce the power of sunlight via a necessary mathematical consequence of doing so, in order to create something they call an “atmospheric greenhouse effect” to make up the difference with which they can blame everything on CO2.  They know it’s a lie, and they think you’re so stupid that you won’t get it!  When they call you flat-Earther’s, they’re laughing all the way to the bank!

From what I’ve read, because I had to figure out what was going on, dog’s eat their poop when they have a nutritional deficiency.  Likewise, Obama, alarmists, warmists, luke-warmists, sceptics and all flat-Earther’s can stop eating the poop of their own mental garbage when and if they’ll improve their mental diet towards rationalism.

Rationalists should start getting upset, and start doing something physical about this flat-earth sophistry.  How about sit-ins in university professor’s offices, where you sit there and mock their intelligence?  If there’s anything these flat-Earth PhD’s hate, it is a questioning of their vaunted intelligence!  They’re quite small little people for the most part, very small little minds, very fragile little emotions, prone to embarrassing mental and often even physical red-faced temper-tantrums, etc.

Draw a line on a piece of paper, divide the solar flux by a factor of four and write down the number above the line, and then draw an arrow down from this number pointing to the line, and ask them if this represents the Earth!  How hilarious, right?  The vast majority of them will say “yes”, that it does look like the Earth!  A line with an arrow pointing to it on a piece of paper – that’s what supposedly “modern science” thinks the Earth is.  We’ve seen PhD’s such as Roy Spencer, Robert Brown, and countless others, already demonstrate this fact for us.  And they’re the sceptics!

Stop being nice to these people and imagining that you can have a debate with them!  Just go out and make fun of how stupid they all are!  Why give ANY quarter to people who want your children to believe that the Earth is flat!!!???  They’re flat Earther’s who deny the distance to the Sun, lol!

Maybe they could be called “Solar Denialists“.

Question 12:  Are you a rationalist, or are you a complete and unremitted idiot of the likes of Gavin Schmidt, Michael Mann, Al Gore, Barak Obama, Anthony Watts, Roy Spencer, Robert Brown, Joel Shore, etc etc?

22 Responses to Slaying Barak Obama and his Flat Earth Society: Obama is a Solar Denialist