This is from Simon Conway Smith: 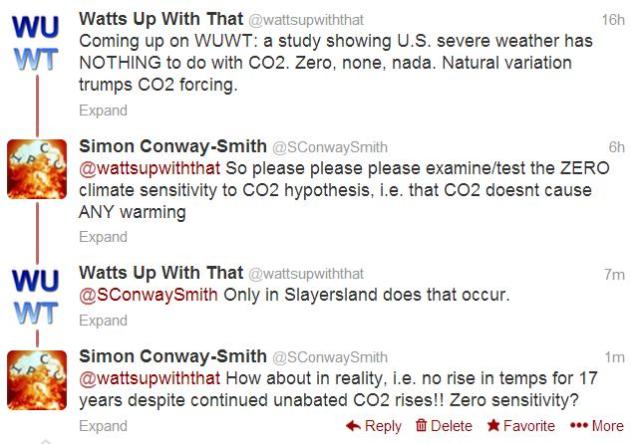 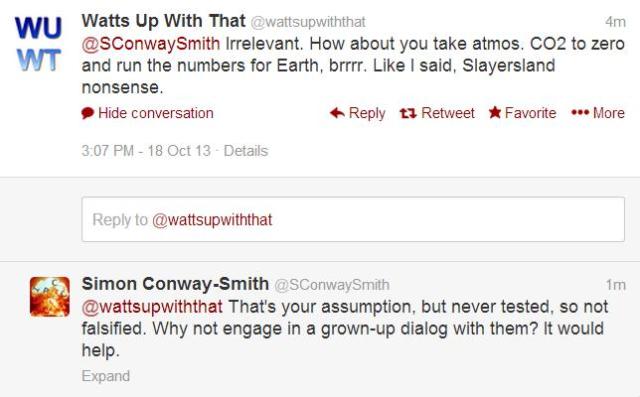 Can an idiot immediately contradict himself?

It seems the answer is a resounding YES!  How can you be that much of a moron?  I just can’t comprehend the stupid…it burns.

And besides “run the numbers”….what numbers!?  We have, and even experimentally tested them, and found no backradiation heating, and then Mr. Watts even did it too with his light bulbs, and found no additional heating either, confirming our earlier results.  I would love to see Mr. Watts “run the numbers with CO2 to zero”!  The guy can’t run a freaking lightbulb!  It’s just a catch-phrase he’s trying to use to make even stupider people think he knows what he’s talking about.

This is the trick guys and it is very obvious: you pretend to be the biggest skeptic group out there, yet 1) you have no actual scientific expertise: Mr. Watts – doesn’t know how to run a lightbulb, and has no credentials in physics even at an high-school level, etc; Mr. Spencer – doesn’t know what a time-dependent differential thermal equation is, etc, 2) you never question and never allow questioning of and you defend with a fearsome, loud, rancorous, religious fervor the fundamental basis of the consequences you otherwise criticize.  You criticize the consequences, but you never allow questioning of the initial premise.

This creates the appearance of “expert criticism” and “critical review”, but it is all simply a feign to defending the initial premise – that 0.04% of the atmosphere causes 33K of heating on the surface, or, twice the heating power of the Sun (etc etc), when this 0.04% of the atmosphere is a) colder than the surface and the flux of sunshine b) not a source of energy like sunshine.

The existence of the debate legitimizes its pretenses.  Do you see that that is how this works?  That is Mr. Watts’ paid-for role – legitimize climate alarm by debating it, and then most obviously and openly when you really press him, in his absolute, totally unscientific, completely irrational given the pretenses, refusal to question or even merely criticize the fraudulent basis of the debate, the greenhouse effect.

You know you’re pressing the sore spot, a very sensitive area, when all of the sudden people get totally crazy, mad, angry, and vitriolic when you question a very peculiar aspect of their belief system. 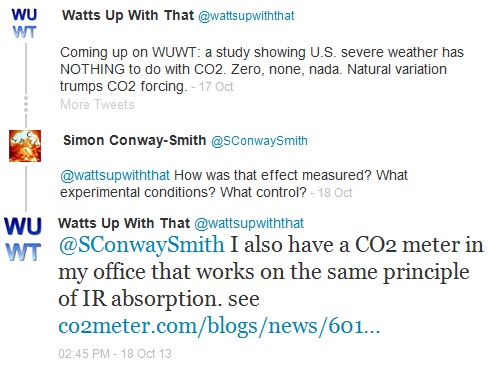 To put it simply:  They’re planning to control you with the greenhouse effect.  It is a fiction which they manufactured and control, and if you believe in it, then automatically you are likewise controlled.  It is a subtle and devious form of control and that makes it the most powerful, and we have all the history of religion and political movements to provide precedent.  This isn’t anything new – it is simply trying out new language.  The test for humanity is if we’re smart enough to reject such control.  Who are the “they” – well, it’s whoever the sickos are that have invented fake religions, fake money, fake work, fake political movements, fake government, fake wars, etc., all of which lend to the ultimate purpose of some form of control, in all our history.  Lyndon LaRouche would say it is the “Monetarist Oligarchy” radiating now from the British Empire/Monarchy, and extending back from the Venetian system and elsewhere.

This entry was posted in Fraud of the Greenhouse Effect, Sophistry and tagged anthony watts, systems of control. Bookmark the permalink.

155 Responses to Burning Watts with Watts