I hope to make it more clear here the relevance of the climate alarm pseudoscience radiative greenhouse fraud in the light of the physical concept of energy flux density.

Recall this diagram of the mechanism of the radiative greenhouse effect, from the University of Washington Department of Atmospheric Sciences: 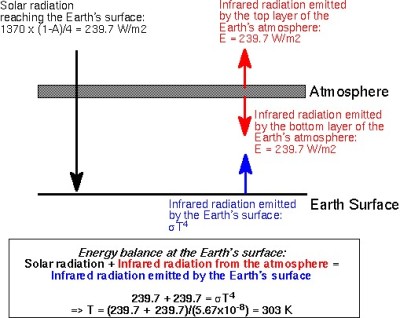 Keep in mind that the reasoning of this diagram and the others like it form the basis of greenie environmentalist anti-human & anti-social climate alarm and pretty much all of climate science.

What they do in the top left corner is divide the input flux from Sunlight such as to spread it over the entire Earth surface at once.  This is where the divisor of 4 comes from because a cross-section interception disk of light from the Sun has ¼ the surface area as a globe Earth with the same radius.

Is this a physically valid procedure?  Mathematically you can do it, and you can call it an average, and you can say it conserves total energy and everything…but does it make physical sense?  Does it reflect actual physics as reality actually “computes” and performs itself?

Think of cooking a turkey if it helps.  Or invert the example:  can you use 4-times the energy (with its equivalent transform to temperature via the Stefan-Boltzmann Law) but applied in ¼ of the time to get the same end result?

In these examples the exact same total amount of energy was used, but did they have the same effect on matter?  Is there a difference between total energy, and energy flux density?

I know that you all understand this…if you don’t, you must not have ever cooked for yourself, or have simply never thought about why and how cooking works.

The answer is no: although one can mathematically calculate an average input power over time and space with an intermittent source (intermittent because sunshine is only present during the day, on the day-side of Earth), such a calculation does not reflect the actual physics that occurs when the power is applied in the actual time and place, i.e., at the energy flux density, at which it actually occurs.

Think of cooking a turkey!  You can’t use an “average power” to cook it – the effect of energy on matter is totally dependent on the real-time, in-situ flux density of the application of that energy.

So, they make that calculation where they dilute the flux density of solar power into a time and space where it doesn’t exist, find that “sunshine is too cold by itself to heat the Earth” and then so as a result they invent a scheme where the atmosphere must double the heat from the Sun with “greenhouse gases that man emits in his development”.

Anyone who thinks that climate alarm is about a social progressive political policy must be severely uninformed on the subject of human development.  Preventing the development of mankind is not a beneficial social policy, and making energy less accessible to poor countries and to poor people is not socialism!  Artificially making energy more expensive (based on reasons of pseudoscience) is not a way to redistribute the wealth away from “Big Oil” or “Corporations”.  What kind of an idiotic idea and reasoning is that!?  If energy is made more expensive and less accessible, then poor people get harmed for that the most.  The increased cost of energy has by far the greatest negative impact on poor people, not on rich people who can afford it without thinking about it.  It allows the rich to get further ahead and to live in abundance while the poor become more and more restricted.  How stupid does a person have to be to think that making energy less accessible and more expensive will harm rich people and benefit poor people?!  These connections made by environmentalist “reasoning” are just so dumb, and seemingly arbitrary and random at that.  And of course, when these things are pointed out, the “socialist progressive” will then actually admit and say that “it is for the good of the environment”, which is an amazing outright admission that their ideology and policy is not about helping poor people and redistributing wealth at all!  They just pretend that restricting energy accessibility and preventing human development is a social policy!  lol!  It’s so bonkers, why do so few people call them out in their deception?!  It is all classic OWO (Old World Order) manipulation of the severely poorly educated and credulous masses prone to fear and hysteria.

When you look at the energy as it is actually physically applied in space and time, and hence in terms of its energy flux density, then you arrive at a totally opposite result of the climate science paradigm: instead of Sunshine being too cold to even melt ice into water, Sunshine actually heats a region of the planet 1/3 larger than the area of North America with a forcing equivalent to 87 degrees Celsius.  And the Sun-lit hemisphere as a whole is forced at 30 degrees Celsius.  This is certainly warm enough for the Sun to drive the climate all on its own, and it does not (irrationally) require the atmosphere to be an additional source of heat for the climate.  Don’t you think that this is an important distinction, and overturn of paradigms?!  Not to the environmentalist anti-humanist, that’s for sure – they absolute detest such a reality, given their underlying wish to have a reason to halt human development, especially that of the poor.

Back to the first diagram.  We’ve talked elswhere about how they like to stop the logical progression of heating that they invented for the diagram at a single iteration, because it coincidentally gets them in the ball park.  Another thing you can do with it is add another layer.  The layer can just be glass, as in a glass greenhouse box.  So, add another layer.  Add several more layers.  Try working it out yourself on paper if you want to see how their reasoning works, but every time you add a layer, the layers below it need to double in flux output.  So, add 5 layers of glass that are transparent to shortwave but opaque to longwave EM radiation.

Calculate the temperature result for 10, 15, and 20 panes of glass.  Can you think of ways such results would be useful?  Why don’t any devices like this exist?  Why do we use a magnifying glass to concentrate Sunlight and start a fire, rather than flat panes of glass held over a target?

Do you really think that merely adding panes of glass to a box with sunlight falling on it will cause it to rise in internal flux as 2n number of panes of glass?  Empiricism doesn’t demonstrate that result, and there’s something irrational about it in its own right, although one can certainly imagine such a scenario and even mathematically justify it!

And even if physics did work that way, their radiative greenhouse postulate scheme is still wrong because real-time solar power has an effect on matter (the climate) on its own that their averaged power value simply does not reproduce.

Climate alarm science is pseudoscience, almost total sophistry.  It is the greatest, and golden, opportunity we have to overturn the paradigm of scientific materialism by exposing just how much of a fraud mainstream academic materialist science actually is.  It’s perhaps even more embarrassing than even Hockney has realized.  It is so amazingly stupid that anyone would 1) accept climate alarm pseudoscience and 2) think that it’s a beneficial social policy (WTF!!!), that it boggles the mind…but then again, what would you expect?  But then again again, it is very interesting to note which subset segment of the population that actually goes along with it.  You’ve been identified.

But in fact, science has never experienced blind skepticism – it’s not skeptical of itself at all!  In the case of climate alarm, I would rather call it “stupid” skepticism because none of the skeptics ever ask the right questions or criticize the correct things!  I’ve always felt that there is some underlying archetypal element to the climate greenhouse effect, which makes people defend it irrationally and with sophistry, like any Abrahamist would and does in their proper environment.

This entry was posted in Fraud of the Greenhouse Effect and tagged energy flux density, flux, human development. Bookmark the permalink.