Someone asked me in the comments what must be wrong with academic scientists for them having such difficulty with comprehension of basic physics.  This was my reply and it sets the scene for the following book-link afterwards:

JP:  My next vid is going to be a basic science lesson and it will touch on what the academics are missing and what they’re doing wrong.

As far as them, they are professionally all focused on some incredibly narrow minutia of their specialization…no wait…I wrote the true answer in my book and elsewhere on this blog:

The answer for how they can behave this way is because they’re unconscious. The degree of anti-rationalism, general absolute philosophical illiteracy but especially that of the philosophy of science, open-ended non-answerable beliefs, beliefs about existence arising out of nothing for no reason and by no mechanism, the denial that they have a mind or agency, etc., the degree of cognitive dissonance that they have been inflicted with and to which they suffer has reduced their minds and mental capacity to that of unconsciousness.

You know how sometimes you suddenly realize that you’ve been driving for the last 20 minutes but remember not a single moment of it? You know how people can sleepwalk and perform basic waking-activities while entirely asleep? You know how you can concentrate on something so deeply and intently that suddenly hours have passed without realizing it?

That’s the mode that an academic is in…constantly. They have been made this way from the result of the negative Hegelian Dialectic…they have incorporated so many cognitively-dissonant ideas into their personal identity as a scientist that it has rendered them unconscious.

Look at this short email I got from Roy Spencer a few days ago:

Is that AT ALL what I’ve been talking about, or am having difficulty with?

Look at this email I got from a PhD in physics at my local university:

anon: “You are doing what all my AGW denier friends do, which is present an argument based on misrepresentations and oversimplifications. Just one example…dividing the solar constant by 4 is not “flat Earth”…. it’s a way of counting the average energy flux over the sphere, which has exactly 4X the surface area of the cross section of the Earth…it gives the correct average energy flux.”

Is that AT ALL what I’m talking about, or am explaining in my vids?  Does that answer in any way at all what I’ve been pointing out?

Are those responses AT ALL relevant to what I’ve been putting out in my vids?

These people are unconscious. We are attempting to interface with people who are sleeping, people who are dreaming and in a dream-state while appearing wakeful.

They are not processing information at a very basic level!

They are not processing information at a level you would expect >75 IQ.

And with that said, anyone who reads this blog I beg you to read the following book:

The Mandarin Effect: The Crisis of Meaning 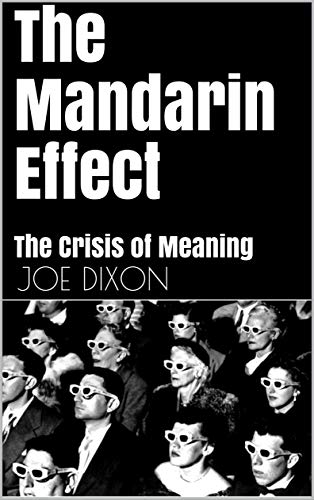 You will find at some point a quotation in this book from yours truly.  But I beg you…if you want to understand what academia is, what academic science is, what the scientific establishment is and how it proceeds, then please read this book.

This entry was posted in Illuminism and tagged academia. Bookmark the permalink.