The Fraud of the AGHE Part 12: How to Lie with Math

Math is True but Words can Lie

If any of you have been reading the material on Illuminism, you will know that mathematics is the basis of reality, and that this is probably something I agree with given my favorable review and presentation of that material.

However, while mathematics is a Formal language, English and any other verbal language are Natural spoken languages.  And with human languages, the inevitable result is that you can lie with them.  Because mathematics can be complicated and it is readily apparent that even people with PhD’s in science have a hard time understanding it, it is therefore possible to present a totally valid mathematical equation and at the same time totally misrepresent what the equation means.  This is, of course, the purview of sophistry and those who produce it.

What I will do here is give you some simple math, and the correct words and correct descriptions to understand it, and then contrast that to some mental garbage that has instead been presented in order to lie about what the math actually means from some examples that I’ve been personally witness to.

Let us look at the equation for radiant heat flow between a hot object and a cold object.  In the equation below, the scenario could be for two walls facing each other which have unit emissivities and absorptivities, so that these factors, and the areas, can all be cancelled out of the equation.  The equation is thus:

and it couldn’t be any more simple.  It simply says that “Q”, which is the rate of heat transfer between a hot object and cold object, in Joules per second per square meter, is equal to a constant “σ” (sigma) times the difference of the fourth powers of the temperatures of the two objects.  This makes sense: the greater the difference in temperature, the more heating power the hotter object will have on the cooler object because it will be that much warmer than the cooler object.

Greenhouse effect believers who apparently do not understand physics, although they can do some simple math, have stated that if you fix Q in that equation, and then increase Tcold, then Thot has to increase “in order to keep Q constant”, and “therefore cold heats up hot”.  This claim is made because they have this faith belief system that cold things make hotter things hotter still, rather than um, you know, hot things making cold things hotter still….(lol).  The person (a sophist) even went out of their way to rearrange the equation so that Q was no longer a dependent parameter on the left hand side of the equation, in order to make it look like this:

All this is, is a simple algebraic rearrangement of Equation 1; doing such a thing does not change what the actual original physical equation represents in the first place.  The only way this simple algebraic rearrangement makes sense is if you were giving a problem to a student, in which you knew the temperature of the cold object and you also knew the current rate of heat transfer between the hot object and cold object, and were thus asked to determine the temperature of the hot object.  Problems like this are done simply for the training of mathematical competency and relating it to theoretical physical problems; the Q parameter in Equation 2 still depends on the difference between Thot and Tcold and can not in any way be independently fixed.

If you understood Equation 1, then it is clear that is impossible to “hold Q constant” if you increase Tcold.  To say that you want to hold Q constant in Equation 2, actually makes Q an independent source of input energy and heat that no longer has any relation whatsoever to the difference between Thot and Tcold and the heat transfer equation, and so that is a completely different problem and set of physical principles you’re dealing with.  Pretending that you can hold Q constant in that equation, in order to further pretend that cold heats hot and thus there is a greenhouse effect, is pure sophistry – albeit advanced sophistry.  It is outright lying with (or should I say, about) mathematics, in no uncertain terms.

How to actually do it

If you want a physical equation that denotes temperature as function dependent on external independent parameters, such as an independent fixed heat source “Q”, then you have to go through the development for such a thing as I showed in last year’s paper where we proved that there is no GHE in operation in the atmosphere.  I’ll quickly show this here.

where “q” (different from big Q; but see ahead) is just the internally held total thermal energy content of an object of mass m, with thermal capacity “Cp“, at temperature “Tobj“.

To know how the temperature changes as a function of a change in the internal energy, we take the differential with respect to time:

where τ = m*Cp for convenience.  Now, in terms of energy input and output and the first law of thermodynamics, the temperature will change when the time-derivative of q, dq/dt, which is the total rate at which energy is entering or leaving the system, is non-zero.  To follow the unit convention above from Equations 1 & 2, where big “Q” is a rate of heat transfer, then dq/dt = Q.  Q now represents the sum of independent and dependent energy inputs and outputs, and so can actually be composed of multiple terms – two terms if there is an input and output.

In terms of radiation, the energy output from the surface of the object is σ(Tobj)4, and so that is the output term of Q which is dependent on the object’s current temperature.  That leaves an input term for Q which can be an independent parameter which doesn’t depend on any other terms in the equation.  Changing the notation a little bit, Q can now just represent the independent input, while σ(Tobj)4 represents the dependent output.  So this gives us

which is a non-linear differential equation.  The input term is positive because it will serve to increase the temperature, while the output term is negative because output provides cooling.  This is the only way in which you can speak of fixing an independent variable labelled “Q”; it works here because Q is a true independent variable which does not actually depend on the other terms in the equation.

To make this loook similar to our initial setup, if Tobj refers to a passive cold wall (Tcold), then Qin can refer to a hot wall with constant temperature, and then Qin = σ(Thot)4 leaving

Now that we have a new equation, I should point out that it is obviously still possible for people to lie about what it means, misinterpret its use, and create greenhouse effect sophistry and obfuscation with it.  Of course, I know exactly how that would be done and what would be said, but I’ll save having to write about it for another article, when a sophist inevitably tries to do it.

This development nicely brings us back to a recent example of someone trying to use mathematics to lie, and misrepresenting what the mathematical equations actually are, and what they say.

Equations 5 & 6 are differential equations and in a very simple mathematical sense they can be said to be “time dependent”, because they can be solved as functions of time.   However, and this is a big however, in terms of physics the equations are not actually physically time-dependent differential equations when the independent input term, Qin = σ(Thot)4, is a constant term, meaning that it has no time dependence.  If you’re actually trained as a physicist, then distinguishing which mathematical parameters actually have physical time dependence and which ones don’t is very important – it couldn’t be any more fundamental to physics.  A real physicist would not say that Equations 5 & 6 are time dependent, because none of the terms are explicit functions of time as used in the averaged-out constant cold sunshine models of the greenhouse effect.

And so this brings us to our good old friend of the most traditional greenhouse effect lie: constant cold sunshine on a flat static Earth!  The mathematical/physics lie here is in claiming that an averaged, constant power input, is the same thing close enough as a time-varying input, and that a differential equation using those constant terms is time-dependent, and of course that the Earth is flat or static (not rotating, no day & night), and that sunshine is too cold to be able to heat anything above -180C, etc.

Essentially, the greenhouse effect premises are just a big tangled plate of a spaghetti of lies. 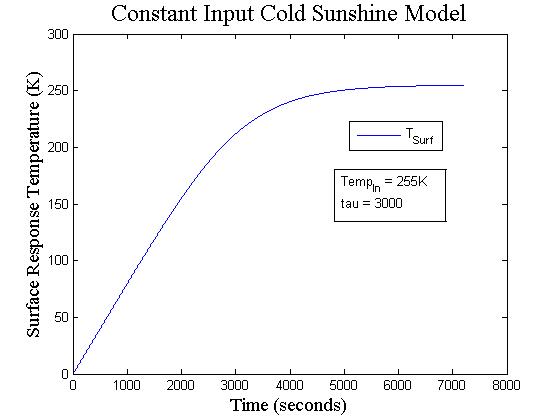 Details on how to numerically compute a non-linear differential equation in Matlab can be found in the appendix of the “Absence of…” paper.

Wow, it just produces a temperature on the cooler surface of 255K (-180C), which is the temperature of this fictional input.

Now, let’s compare this result to an actual time-dependent differential equation that uses real, actual, time-varying, and even temperature-dependent parameters in the heat flow equation, that even models the latent heat of fusion of ice: 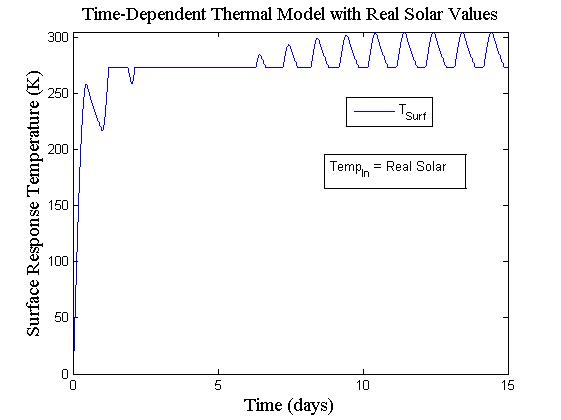 This data can be read about in the “Absence of…” paper.

Gee look at that: a model that actually tries to represent something in reality using equations which actually reflect reality, i.e. true time-dependence, and true dependence on the real-world behaviour of matter, and true solar input, produces a temperature oscillation that never goes below freezing (00C), and produces temperatures in excess of 300C!

That’s enough to melt ice into water and to even produce clouds from evaporation which creates yet another latent heat barrier from condensation.  And this is still a very crude model, which can be greatly expanded and improved as discussed in the paper.  If this model is crude, it is only because the constant-input model which creates the GHE is a complete fraud.

So, do you know what the GHE (greenhouse effect) believers do to their time-independent model which can’t get anything above 255K with their freezing cold fictional sunshine?  When I was in undergrad, a few of my friends and I had this joke about the “magic constant” – the magic constant, “M“, is a term you can add to any equation in order to make it produce the correct answer.  The GHE sophists literally do this:

where M is magically the GHE.  The GHE is the magical term which lets their models melt ice into water, produce clouds, and give warm days at the beach with foot-scalding sand, because they screwed up solving the complicated heat flow equation and got the derivation all wrong!  They add in M = GHE in order to make their incorrect solution appear to produce the correct results.

The Problem of Letters

I am beginning to realize that this must be very difficult stuff for most people to understand.  It all seems perfectly obvious and clear to me, but if people with bigger letters beside their names than I have can’t even figure it out, and wildly flail about sophizing the mathematics, then maybe it really is that complicated for most people.  I don’t think it is complicated and so that’s why I always suspect that the people who lie about the math must be doing it on purpose, but, maybe Napoleon really did mean for us to not underestimate stupidity.  I guess it makes sense that stupidity pulls itself off as extremely confident, which creates the appearance of authority and purpose, because that is of course exactly how stupid stupidity would be.  Stupid doesn’t know how stupid it is; the working solution for the masses and stupid people in general is to relegate to following whoever appears to be an authority, and such is quite independent of competence.  This is of course the history of the disasters of our history.

190 Responses to The Fraud of the AGHE Part 12: How to Lie with Math