For back-links to this debacle of the steel greenhouse produced by a non-scientist with no scientific education to speak of, see here.  It’s quite a funny story and it is not surprising that this fellow is one of Anthony Watts’ main science advisers…see here for an example of Watts’ own failed attempt at doing science.  (And see here for Roy Spencer’s, another main Watts adviser, own confused debauchery of logic and physics.)

Isn’t it strange that the “approved” mouthpieces of the skeptics are 1) scientifically illiterate people, who 2) defend and protect the originating basis of the climate alarm fraud, i.e. its sophistical version of a greenhouse effect, from criticism?

Yes, that is strange.  You see what’s happening?  They allow and indeed promote any manner of lively debate…except the one that matters.  Interesting.  Does it have an obvious answer?  It has a few possible answers: A) they’re just incompetent retards that mean well, B) they’re incompetent retards that don’t know they’re being used and had by the climate alarm cabal, C) they know what they’re doing and are purposefully protecting the single fraudulent basis of climate alarm while posing as skeptics and promoting debate which is ultimately useless because it never gets to the fundamental.  There is no answer which absolves them of responsibility for the crimes they’re committing – at best, they can claim incompetence.

Not that the steel greenhouse and thus the climate science greenhouse effect hasn’t already been debunked in the aforementioned first link, let us use another example to demonstrate how its very own postulations debunk themselves with a trifle application of logical, scientific, and mathematical analysis. 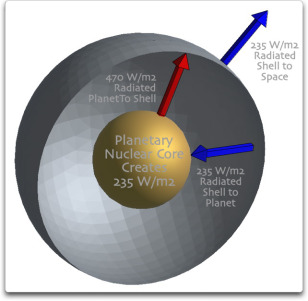 Of course, as we’ve seen, Willis actually violates the law of conservation of energy with this diagram, but he justifies this by saying that he “only violates it a little bit”, “if he makes the violation small rather than large”, and that “this is how approximations work in science”.  Anyone with any actual scientific training or logical competence is on the floor howling at this point!

The sphere contains the source of energy, so let’s remove the sphere from inside the shell and make the shell itself be the container for the power source; say that the shell is uniformly “salted” with nuclear material and so the entire thickness of the shell is where the energy originates. 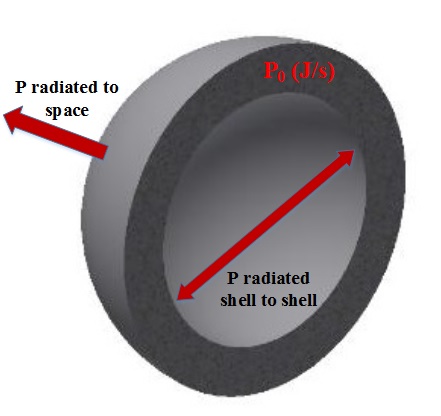 So, the shell contains a source of power which produces P0 joules per second of energy uniformly distributed within the material of the shell.

which has the solution

which of course goes to infinity as the time, t, goes to infinity.  That’s the runaway heating which is always the end result of this type of reasoning, and it thus debunks itself, if anyone were honest enough to pay attention to their own logic.

Of course, what Willis (& Roy Spencer on other occasions) simply do is to arbitrarily stop the self-heating process at the value they want, by using mathematics which has nothing to do with the differential nature of heat flow and temperature change.  They say that the half of the energy which is emitted internally gets absorbed internally, causing temperature increase.  So, they add 1/2 to 1/2 and get 1, and then claim that cold can heat hot and also that same temperatures can heat up each other.

It’s convenient for them to stop there, but it isn’t logical: their physics says that any internal emission results in absorption and thus temperature increase irrespective of the heat flow equation (because they ignore the heat flow equation), and so when the temperature is increased to result in total power of 1, this has to then add to itself again since it is emitting upon itself, and thus it has to absorb itself and be heated up some more since that was the original premise of their physics.  But they then ignore their physics.

Isn’t it amazing what you can do with sophistry, incompetence, and dishonesty?

If You Care to Know

So what is the temperature of the inside of the shell?  Can you figure it out on your own?  Don’t read on, and see if you can figure out the physics and logic by yourself first if you like.

There is no loss of energy on the inside since any emission is replaced by absorption from the same thermal environment – the interior is essentially always in equilibrium with itself, thus it can’t change its own temperature via exchange of energy with itself.

There is a constant input of power P0, but this energy is lost only on the outside of the shell, and so the equation for the temperature of the exterior of the shell is

That is, it is just given by the power spread over the exterior surface area.

Too bad it is so easy for these people to pretend other things instead – to lie, to be dishonest, to be incompetent, and to be accessories to fraud.