Here is the IPCC definition of the greenhouse effect, upon which climate alarm and its socially, politically, economically and scientifically destructive movement is based: 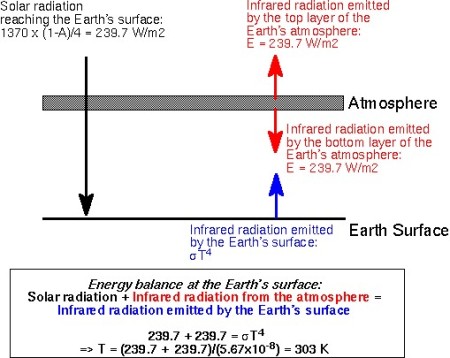 The IPCC definition of the greenhouse effect, which is the sole fundamental underpinning of climate alarm. See http://arxiv.org/ftp/arxiv/papers/1510/1510.02503.pdf for a full listing of official references to this mechanism by the climate science establishment.

“Heat is defined as the form of energy that is transferred across a boundary by virtue of a temperature difference or temperature gradient. Implied in this definition is the very important fact that a body never contains heat, but that heat is identified as heat only as it crosses the boundary. Thus, heat is a transient phenomenon. If we consider the hot block of copper as a system and the cold water in the beaker as another system, we recognize that originally neither system contains any heat (they do contain energy, of course.) When the copper is placed in the water and the two are in thermal communication, heat is transferred from the copper to the water, until equilibrium of temperature is established. At that point we no longer have heat transfer, since there is no temperature difference. Neither of the systems contains any heat at the conclusion of the process. It also follows that heat is identified at the boundaries of the system, for heat is defined as energy being transferred across the system boundary.”

Thus, there is no heat transfer from the atmosphere to the surface.  Thus, the climate science greenhouse effect is incommensurate to the modern definition of heat.  Thus, the climate science definition of the greenhouse effect, upon which alarmism and its associated socially, politically, and economically regressive and scientifically destructive political movement is based, is false.  Thus, climate alarm and much of the entire field of climate science itself, is in fundamental error.

At this point a secondary argument for a radiative greenhouse effect arises, where emission from a cooler object “slows the emission” from a warmer object thus making the warmer object warmer still.  This is called the “blanket analogy”.

However, given the Stefan-Boltzmann Law, where an object’s emission is proportional to its temperature and given its emissivity:

and given the definition of radiant heat transfer:

then one can see that one cannot prevent something from emitting at the temperature that it is at.  That is, emission from a cool object does not slow the emission from the hot object.

In other words, you cannot prevent something from emitting at the temperature that it is at.  And of course, again, radiant emission from a cooler object does not transfer heat to a warmer object.

A blanket is about preventing convection, and has nothing to do with radiation.  And there is no stopping radiation – everything emits at the temperature it has acquired and you can’t stop it from emitting at the temperature that it is.  Whereas, one can prevent what would be open convection.  And so this alternative version of the radiative greenhouse effect is as logically baseless as the original IPCC one.  Radiant emission can’t be prevented, whereas convection can be prevented; therefore it is a false analogy.

I’ll ask again:  Why would people like Roy Spencer, Anthony Watts, Christopher Monckton, JoAnne Nova, David Evans, et al, invent and defend new, alternative versions of the greenhouse effect which thus serves to protect alarmism from fundamental criticism, while not admitting that they thus agree that the IPCC version of the greenhouse effect must be incorrect (since they invented an alternative GHE), and while not acknowledging that this is what they’ve done?  Or if they don’t do the alternative thing, then why would they defend the original IPCC greenhouse effect when the basic definition of heat debunks it?  What purpose are they serving?

When the alarmists themselves do it it is understandable – they are keepers of the faith, true believers, fanatics, human haters and life haters, last men, destroyers of civilization, etc.  The fact is that some people aren’t just invested in the fruition of the alarmist movement, but are invested in the continuance of the debate itself.

Now, the alarmists might complain that the existence of the debate gives false legitimacy to skepticism of their movement which thereby harms their movement, but the way I see it is by taking a page from Lionell Griffith:  if you witness something absurd, then consider the end-point of the absurdity, and thereby you will see its true purpose.

Therefore, the existence of the form of the debate coming from the side of the leading, most widely recognized “skeptics” (many of whom named above), where the existence of the debate is promoted ad nauseum and where they defend both the original and invent alternative versions of the greenhouse effect, and where the greenhouse effect is the sole basis of alarmism, thus indicates that these so-called skeptics and the debate they support are actually working for the climate alarmist movement.

You have to wonder why people would defend climate alarm by inventing a new greenhouse effect for it, when the IPCC greenhouse effect has just been debunked very simply by the definition of heat?  Isn’t the IPCC greenhouse effect the one we’re concerned with, and since it has been shown to be non-existent, then we should tell that to people and spread the news, rather than invent and defend (multiple) alternative versions?  Given that people seem not to care about that, nor care about the illogic of inventing alternative versions, then it is clear that this is what is desired.  They mean to promote alarmism and its socially, politically, economically and scientifically regressive and destructive policies.  They want to believe in and promote a greenhouse effect, and at least to a certain extent, climate alarm.

The existence of the debate legitimizes alarm.  Or, serving another purpose, it legitimizes the destruction of science and logic and reason.  Even if alarm was accepted to be debunked, but the radiative greenhouse effect and most of climate science remained, we will still be ending with what it worst: the full usurpation of science by political sophistry.

“Consider the fact that within the realm of rhetoric (“the art of effective or persuasive speaking or writing”) the “analogy” is used to convey an abstract idea using a concrete or tangible reality.  For example one might say, “You are as annoying as nails on a chalkboard.”  Being annoyed is an intangible, emotional feeling whereas “nails on a chalkboard” actually generate a physical sound that is very unpleasant to listen to.

Scientific truths are tangible realities and as such are in no need of an analogy to be understood.  They are simply observed and/or experienced.  Charles Law, for example, is a scientific truth.  If you keep the pressure of a gas the same the temperature of the gas will be directly proportional to its volume – as the temperature increases so does its volume.  One does not need to use an analogy to understand Charles Law; one simply states what is observed in the real world.

Ergo, if the “greenhouse effect” were a tangible -a scientific- reality it wouldn’t need to be explained vis-a-vis an analogy.  One could simply observe and describe its operation in the real world.  Even the name “greenhouse effect” is itself an analogy used to give an intangible thought or idea the appearance of being a scientific reality.  The intangible idea, “the presence of carbon dioxide in the air causes the air to be warmer than it would be without it,” has not only not been observed in the real world, historical observations that compare CO2 levels and temperature contradicts the belief.  In order, therefore, to make the “greenhouse effect” appear to be real they attach an analogy to it drawn from the tangible world.

Scientific truths also have a singular name, they have a singular definition and are quantified by a singular mathematical formula.  All three of these singularities are absent when it comes to the “greenhouse effect” hypothesis.”

Nothing more needs to be said.

All Slayers are lovers of logic.  We’re all rationalists and the core Slayers are probably all INTJ’s; logic and reason is all we talk about over email, when it comes down to it.  It is the logic of this situation that concerns us most.  I was an alarmist before I decided to look into things myself, and as soon as I saw that the historical correlation between temperature and carbon dioxide actually indicated that it was temperature change that caused carbon dioxide change, rather than the alarmist implication that carbon dioxide drove temperature, I knew that there was a major problem here.  Looking into it further, you find that this “problem” is actually a “feature(!)”.  Almost everything that alarmism and climate science says and does is sophistry.

The Slayers won, and we won on the first day we entered the argument.  The meantime has been spent bemusedly witnessing the attempt to protect the faith, and the intended fraud.

Just look at what has transpired:  Our argument hasn’t changed, because the definition of heat and temperature hasn’t changed; whereas, the argument for the climate science greenhouse effect has changed repeatedly, every single time we keep debunking them.

What happened here is going to get out.  And the Slayers are the victors.

Gallery | This entry was posted in Fraud of the Greenhouse Effect and tagged blanket analogy, Slayers, victory. Bookmark the permalink.