Here are two graphs that demonstrates why the “greenhouse effect” hypothesis is false.

What do we see in the real world? 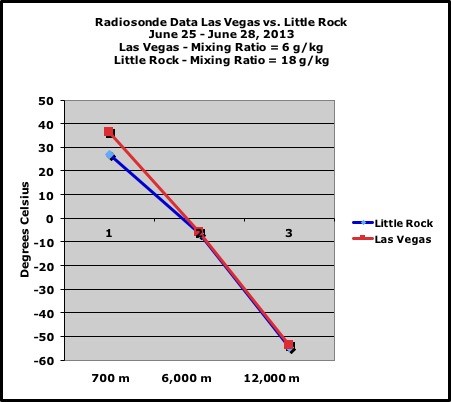 What we see in the real world is neither of the above.  Far from there being a 10-20 C increase in ground level air temperatures in Little Rock there is actually a significant decrease in the ground level air temperature.  Also, there is a significant decrease (not an increase) in the lapse rate below 5 km in altitude where the concentration of water vapor is the highest.  This second graph is of actual temperature readings taken from weather balloon soundings above Las Vegas and Little Rock—a four day average of the temperature at 700 meters, 6 km and 12 km.

Important point: These readings are 100% in sync with the universally recognized observation that the presence of water vapor in the air causes a decrease in the lapse rate—the rate at which the temperature of the air changes with altitude.

Within today’s scientific community there exists two competing notions.  On the one hand you have the “greenhouse effect” hypothesis which would have you believe that water vapor “traps heat” in the air, which would manifest itself in two ways: 1) higher ground level air temperatures and 2) an increased lapse rate below 5 km in altitude.  What we see in the real world is this; 1) the average ground level air temperatures in humid climates are lower than in arid climates that lie along the same latitude and 2) as one descends from 5 km to the ground in humid climates the concentration of water vapor increases precipitously, yet there is no sign of an increased “greenhouse effect” that is trapping more and more thermal energy, which would accelerate the lapse rate.  Instead we see the opposite.  As one descends into a humid climate the lapse rate decelerates—becomes less pronounced—than it does in arid climates.

That the “scientific community” continues to cling desperately to its belief in the “greenhouse effect” hypothesis in the face of this universally-acknowledged, empirical observation that falsifies it is puzzling.

[JP Comment:  In one of my earlier papers I had made the point that if there was a radiative greenhouse effect increasing the temperature of the atmosphere as one descends, then the observed lapse rate should already be greater than what is calculated from the simple -g/Cp derivation.  Yet, the observed dry lapse rate is equal to the non-GHE derived dry lapse rate of  -g/Cp, and the addition of water vapor, which is supposed to be the strongest greenhouse gas, lowers the lapse rate, not increases it.

This entry was posted in Fraud of the Greenhouse Effect and tagged lapse rate, las vegas, weather balloon. Bookmark the permalink.