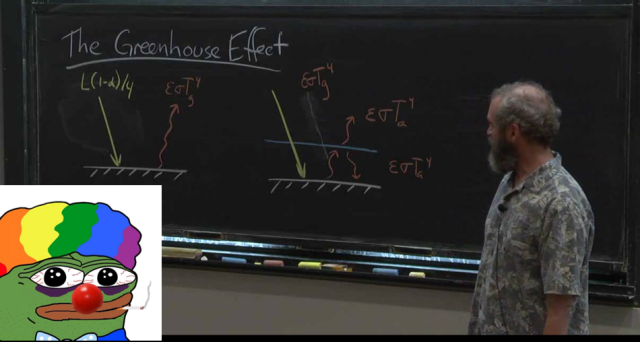 You know who the clown is?  That clown is a PhD in Geophysics at the University of Chicago!  To be a PhD in geophysics requires that you’ve taken advanced-level multi-dimensional calculus including partial differential equations and Fourier Tranforms, have entirely completed classical physics, some computer science courses, courses in statistics, and much more.  But look at the clown look at their clown flat Earth greenhouse effect of clown climate alarm so proudly!

It’s a clown world after all.

Clowns love flat Earth theory…and ginning it all up to look like science.  Of course that’s what you get in clown world!

Have you taken the HONK PILL yet? 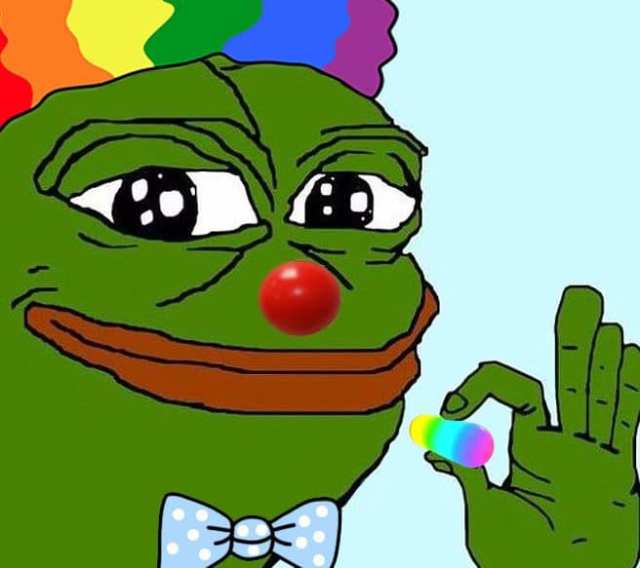 You’re going to have to.  Everyone eventually takes the clown pill.  Except for NPC’s.

Where do YOU fall on the pill spectrum?

You know if you look closely at the clown in the top graphic, even with the clown glancing away it seems you can almost detect something of an incredulity in his posture.  It is as if something just isn’t sitting quite right with him.  Do you see it too?  I think it’s almost coming to the surface for that clown.

But if there’s one thing about scientists, to be a scientist one must have a remarkably low degree of curiosity about the world.  Yes, it’s true.  Ostensibly scientists pretend that they are curious about the world…but they’re only curious about it in the sense of autistic stimming…in the sense of licking a bicycle wheel repeatedly because of the strange texture and taste of it…over and over again…for a whole summer.

And thus, for this clown in that top graphic, it is entirely sufficient to have FIVE DIFFERENT COLORS ALL AT ONCE(!!!!!!) sensating upon his retina!  OMG ALL THE SENSATING!

Ahhh…I just got it now…his posture isn’t that he’s slightly uncomfortable about something…his posture is that he’s super-amazingly proud of his five differently-colored chalks and how much physical sensating he’s produced with them on the board.  It’s not incredulity in his posture, it’s incredibility.  The five different colors are giving him a sensation of incredibleness!  ALL THE SENSATING!!

This entry was posted in Fraud of the Greenhouse Effect and tagged honk world. Bookmark the permalink.